How would you label enduro? How would you describe enduro to an “uninitiated”?
Enduro is Sam Sunderland belly-shoving on the Salar de Uyuni, Paolo Ceci floating at full speed on Mauritania’s sandy plateaus during the Africa Eco Race, but it is also Jarvis tiptoeing, precariously balanced, up the rocks of an impossible climb or our Salvini brushing the trees with the hand guards during a race in the woods!
Yes, enduro is all of this (sorry if it isn’t enough!), but I believe I too have been riding enduro for 15 years now, even if I did nothing of the above, because enduro is also the Sunday ride at one own’s pace and ability, switching from a mule track to lunch with friends.
It is hard to categorize our discipline … no wonder! It doesn’t have fenced racetracks nor age limits, each one of us has a white-haired companion who still rides fast, all of us met the seventy-year old motorcyclist who doesn’t give a damn about his peers’ arthrosis deciding to cure his with another type of ultra-therapeutic mud.
In addition to racers, there is an army of people who couldn’t care less about lap times, who choose their own pace without feeling compelled to perform: are you fit and trained? Then rip it up! You aren’t but you still remember how to can it? You go until your arms ache and then you slow down!
It is the only motor discipline where you can set your own pace without being forced to speed it up for fear of being teased if you don’t close that double or if you don’t drag your elbow.
Think about it, it’s the recipe for longevity and it’s what draws us together in motley groups that include the throttle jockey who jumps on every root as well as the motorcyclist who simply wants to get away from his wife on Sundays and uses the bike as an excuse.
I live my passion with a mixed group like this, that comprises people who train their wrist rolling the throttle as well as those who train it rolling spaghetti. 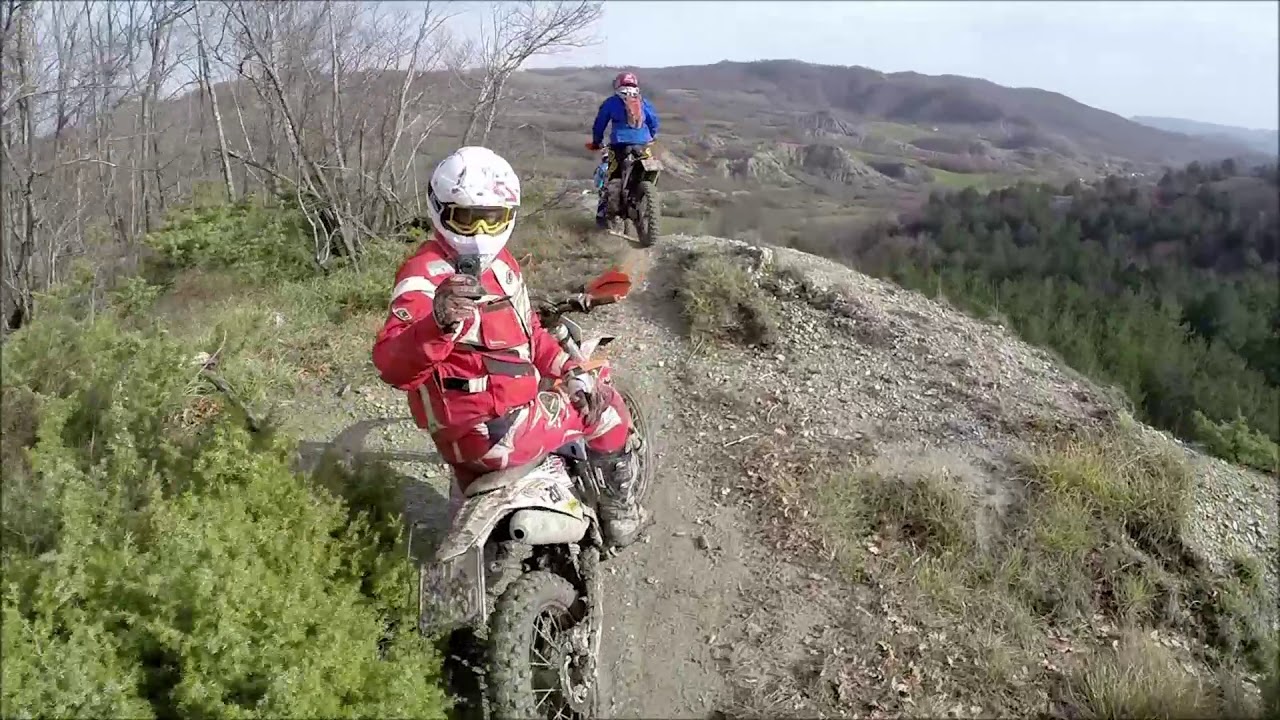 It may be a sui generis group, we never officialized it, nor gave it a name, there is no Motorcycle Club behind it, not a member card nor a license; there is only a bar that is our Sunday meeting spot and a call message sent on Fridays.
For 15 years a group of more than ten people, with completely different paces, waited for one another at crossroads, helped each other on trails and laughed hysterically in the woods in Central Italy, like that time when, at the end of a steep and demanding plunge, we stopped to wait for Luca.
After a few minutes, here he came placidly out of the woods, unaware of a bullet shell stuck between his helmet and visor, clearly a consequence of a harmless fall.
Upon his arrival a banter begun:
“Luca, is everything OK? Did you fall?”
“Who me? ABSOLUTELY NOT!”
“Than watch out, hunting season is open!”
He was dumbfounded by our answer and laughter until we reached the restaurant where he understood everything when he took off his helmet and started suggesting very interesting destinations for our future tips!
In these 15 years, thanks to our passage and without even realizing it, we maintained a dense web of paths and trails that connect towns, restaurants and panoramic viewpoints. And only we, as endurance motorcyclists, could do it; where mountains are “unbranded”, as where I live, when their name isn’t Col di Tenda or Dolomites, there is no C.A.I. (Club Alpino Italiano – Italian Alpine Club) maintaining them, no maps nor officially marked trails; often, in certain areas, we enduro riders are the only users and guardians. Paths and trails are known by the names verbally passed down from our grandparents! To close them would mean to impoverish the territory, even animals wouldn’t be able to use them as they would be lost!
This is another, the nth, aspect of a motor discipline that has no boundaries and can hardly be categorized!